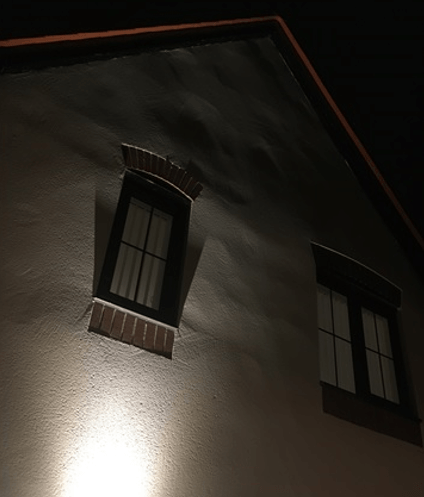 LSTC was approached by a UK based Architect to investigate the relative flatness of rendering on the front façade of a newly built dwelling, which upon visual inspection by the owner of the property, appeared to not be compliant to NHBC Standards for Rendering.

To reduce site time and to gather the most comprehensive and accurate information possible, we carried out the investigation using a Trimble TX8 3D Laser Scanner; in a single visit we were able to gather high-density point data of the façade in question to millimetre accuracy.

Gathering the data in this way allowed us to digitally produce an accurate, colour-coded depiction of the deviations in the surface of the render, highlighting the variation from a defined flat plane (3 points at the extremities of the façade.) The scan data also allowed us to generate several highly accurate vertical and horizontal cross sections of the rendering, which were then examined and tested in accordance with NHBC Standards for Render flatness.

The client was provided with a Part 35 compliant Expert Witness report detailing our findings, a colour map depicting the variations in the render, and each individual cross-section of the render used in our analysis.

From these deliverables the client was able to make an informed decision on how to resolve the property owner’s issues, ultimately settling the matter and avoiding a potentially costly legal process.